I have just released version 1.8.2 of the Live USB of Bubbagen for the B3 on GitHub

You may ask: what is Bubbagen? Bubbagen extends Sakaki's gentoo-on-b3 with the full functionality of the original Excito "Bubba" system and is here provided as a full-blown operating system for you to try without needing to change or harm your existing installation. As with Sakaki's gentoo-on-b3 Live-USB, you can even use this on a diskless B3.

While this is the very first release of Bubbagen since the completion of the Bubba overlay, I have decided that the version number should reference the core legwork done by Sakaki. The reason why this is version 1.8.2 and not 1.8.1 is that just when I was ready to finish work on the 1.8.1 release, Perl 5.22 got marked stable for ARM and I had to redo just about everything. So essentially there is also a 1.8.1 release, but it never left beta and got replaced by 1.8.2 with the new Perl. If you like to know what else is on the Live USB, here is a full package list.

Do note that this system was designed to be controlled by the web admin UI. There are some changes to the original Excito software though, such as that it will respect and keep settings outside the range of the admin interface. Such as network interfaces other than eth0, eth1, wlan0 and br0 - outside these NICs you can define anything you like with regards to networking. If you touch, change or dereference config files that are controlled by the web admin interface you'll be pretty much on your own. But then, that is the Excito concept after all. 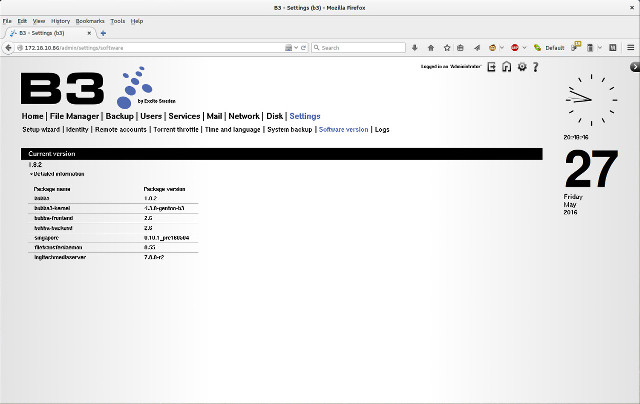 Some additional software details:
Everything else is just new and improved versions of what you either know or don't care about.
Top

I have become aware of a few issues with the Live USB: Sorry about the inconvenience that these issues may cause or have caused you. As I am currently working on moving to systemd it's rather difficult for me to publish a revision right now. Running the updates shouldn't take too long though.

Then run the updates:

This is quite verbose and will spit out a lot of info to your screen. There's no need to read through all of it. The interesting parts will always be printed in either green, yellow or red and summarized on the end.
Top
Post Reply
3 posts • Page 1 of 1